Hi folks I am writing this after months of problems relating to Smart Gas meters and trying to fit one in a semi concealed meter box.

Back in 2017 OVO suggested it would be a good idea to upgrade to smart meters. A Lowri Beck engineer was dispatched and he removed our working gas meter and fitted a new smart gas meter. After he left we noticed the meter box lid was buckled and the noise from the meter was vibrating through the house.

Without boring you with the whole story...The smart meter was replaced with a new digital dumb meter.. (This engineer said "which clown tried to fit a smart meter in there")

The new dumb digital meter also failed with a blank screen after a few months ... This was then replaced with another dumb gas meter...

This latest one failed with a blank screen back in March.

Since then we can take no gas readings and have been left in limbo. 2 weeks ago my wife received an email from OVO asking us to contact a company called "Cadent" who would be able to provide a concealed gas box extension quotation which would give room for a smart meter.

We rang...The guy laughed a lot ... and said... We stopped doing those 2 years ago because it was too much hassle.

Latest advice from OVO is for us to find a builder to fit a concealed box extension which you can buy from a builders yard...I haven't found such a product anywhere yet..!!

So... sorry to drone on ... This is the abridged version … At the moment we cant read our dumb broken meter and have no idea how to upgrade the box so we can have a new meter. Apparently the dumb meters are no longer available.

Photo below is current dumb meter in box.(Digital Screen is Blank)

P.S. I see some people on this forum have had a SMETS 2 meter installed by OVO in a concealed box. Why can't we have that option ... It has never been offered..?? 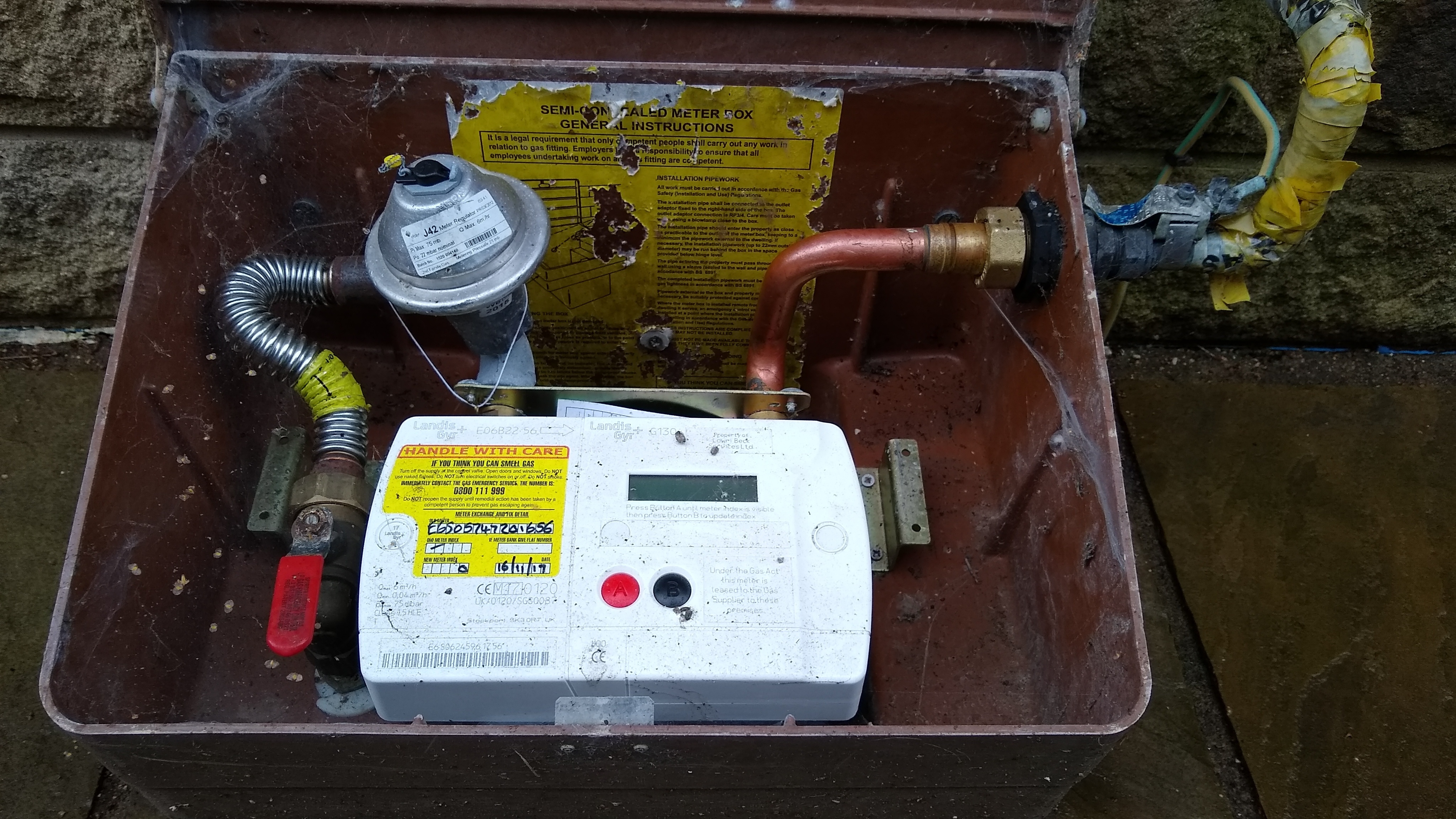 Userlevel 5
Potentially SMETS2 meters aren't available in your area, , have you seen this topic? essentially moved his gas meter box - could this be an option for you?
My friend told me how electricity is measured and I was like Watt!
P

Hi Thanks for the reply.. not sure about this.. but I assume it's a major operation.. I didn't realise SMETS 2 were only in certain areas... I really wish we had never gone down the smart meter route.. I think we were early adopters and the engineer should have known not to try and fit a smart meter in our box.

Maybe could update on his progress..
B

My scenario was different to yours. A few years ago they upgraded the gas main in our road and as part of this they also renewed all the pipes running from the main to our gas meters. Our meter was at the back of the house at basement level, inside in a specially installed cupboard. They insisted that the gas meter be relocated outside at the front and put it in a box in a hole in the driveway next to the house. The box was never properly fixed (you could pick it up) and the meter was half buried in a hole in the ground. There was new pipework which ran under the front door and round the outside of the house (through a gate post!) and into the basement.

We later requested a smart meter from OVO and had to wait until they had one suitable to be half buried. It fitted in our box OK but I am not sure whether that was just because the hole in the drive had been made deep enough.

Anyway, we were luck enough to build a small side extension on the opposite side of the house. As part of this we got the builder to include a box fitted into the external wall to house the gas meter and get it off the driveway - where it was in danger of getting run over and was constantly tripping us up! The new wall box we had was big enough for the smart meter and it was moved without any issues. We (the builder) dug the trench for the pipework to be diverted to the new location. The builder was having to move the boiler anyway and so ran new pipe from meter under the floor in the new extension, and so was able to remove the old pipework running round the side of the house. I have not idea if our meter is SMETS 2?

Hi Thanks for the reply.. quite a story.. It's not something we would want to do now you have explained your reasons. OVO have already agreed to pay for our meter box to be modified to accept a smart meter..

We can't recommend where you purchase a meter box extension, , but I'm sure there are local hardware stores where you'd be able to purchase one from.

Thanks!
OVO-Joyed to help!
P

Hi already tried.. they never heard of them .. My wife complained to OVO chief exec.. she received a call this morning and the gentleman has gone off to investigate . He admitted that your engineers (Lowri Beck) should never have removed our old meter..

Sorry to hear that's the case, , we no longer use Lowri Beck.

I had a quick browse online for you and found this on the national grid website, it may be of some help!

Thanks!
OVO-Joyed to help!
P

Hi Thanks for your reply .. greatly appreciated.. Interestingly enough the gent my wife had contact with at OVO emailed her the very same thing ...

We should be able to get somewhere with this now ..

P.S I will update as we go along as it maybe of interest to others..

Userlevel 5
We'd love to hear what happens here, , so please do update us when you can! It will be helpful for other users too!