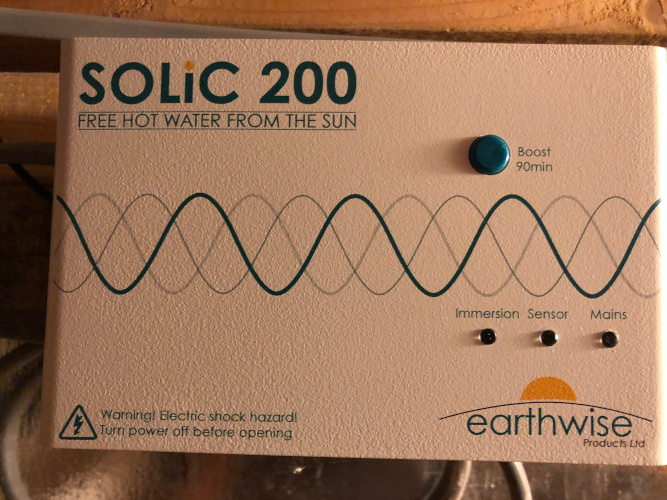 Solar PV (photovoltaic) diverters are a small unit that diverts unused electricity generated by the solar panels to the immersion heater of your domestic hot water tank.

Mine cost about £80 from eBay and I fitted it myself (but most would need an electrician). For the home owner this means when you aren’t using the electricity your solar panels are generating it will divert the ‘spare’ electricity to the immersion heater rather than exporting to the grid.

On good days it will provide all of the heating to your hot water tank. If you are on a Feed in tariff you get paid your 50% of generated export payment regardless of whether you’ve actually exported 100% or 0% to the grid (*moderator note: this only applies if you don’t have a smart meter, which can measure export exactly). So financially it’s a pretty worthwhile addition but as  pointed out it’s also a selfish technology.

My heat pump should heat the water with an efficiency somewhere around 3, so for every kWh of electricity used by the heat pump to heat the water it generates 3 kWh of heat into the tank. An immersion heater has an efficiency of 1. So it would be better for the holistic energy usage of the grid to export unused electricity from the panels to the grid and heat the water using the heat pump rather than the immersion heater but it’ll cost the home owner more, unless some system like the flex platform could help manage this demand.

In reality though, home heating demand over autumn/winter/spring will account for 80% (rough guess and will vary by property) of a home owners energy usage so the energy saved by the home owner/not exported for the benefit of the grid won’t be significant in the grand scheme.

A better solution would be home energy storage(battery) and using the heat pump to heat the water from this source but battery prices are just too higher for many people to afford even with the offers around at the moment.

(hope this reads ok, on phone from a campsite In Pembrokeshire (off grid

Follow on Solar PV diverter. Mine is a Solic 200. It had been running with my previous gas central heating system. The benefits are slightly different here in that it was using green energy to heat the water rather than gas so I think it’s use probably stacks up better in the bigger picture. Here’s a couple of photos of the setup one cropped from a website:

Apart from the Solic 200 unit, there are a number of other PV Diverters available including the iBoost by Marlec, and the Eddi from My Energi.

Each operates along the same principle idea of waiting until the maximum permitted grid-export has been reached and then diverting the balance into heating water.

All PV Diverter units must be approved by the Electricity Networks Association (ENA) and registered on their database as such. That gets checked by the Distribution Network Operator (DNO) during the application process for the grid-connection under G99.

This verification is important because the Solar Inverter will be rated at more than the permitted export level - usually 3.68kW. Only certified diverters can be trusted to ‘fail safe’ and prevent the entire output from the Inverter being sent to the Distribution Grid.

At present (Aug’21) Storage Batteries and EV chargers are not permitted to use PV Diversion techniques.

A PV-diverter is what I would call ‘selfish technology’. I’m not referring to the householder(!). It’s that the Diverter control algorithm only takes into account the best option for that particular property at that moment in time.

Compare that with the hypothetical use of a central control system, covering all the houses served by the same local substation.

Such a possibility is being developed by Kaluza, the R&D division of OVO. Their Flex platform has future-planning at its heart and uses a weather-forecast input. It takes a broader view of the demand and supply requirements on the Distribution Grid.

So if Flex were permitted to do so, it could ‘decide’ to first export excess PV generation from a house in order to satisfy an immediate grid demand (at a profit!). It could then ‘pay back’ that householder (import) at a later time by heating the water-tank when power is cheaper and more abundant.

Better still, Flex could do the ‘pay back’ in a more useful fashion, such as returning the electricity to an EV charger rather than a hot-water tank.

That way of using the Flex strategy is ‘altruistic technology’. It allows an ethical dimension into the routing of energy export, and can better use the precious grid capacity to serve the wider population. I’m not aware (yet) whether the Flex Platform is actually being developed in this direction. It’s obviously ‘company confidential’!