Hi, 5 days ago my IHD began showing lost connection. It had been working perfectly since install in September.

I’ve read on this forum that it could be to do with no mobile reception but we have that and can tell by the WLAN red light flashing frequently on the elec meter. (Plus it worked perfectly before).

Does the IHD need repairing with the smart meter?

The WAN light is to do with the meter connecting to the mobile network and sending back data.

The HAN lights are to do with the meters (Gas and Electricity) talking to each other and also communicating with the IHD.

Which lights are solid and which are flashing?

The WAN light is to do with the meter connecting to the mobile network and sending back data.

The HAN lights are to do with the meters (Gas and Electricity) talking to each other and also communicating with the IHD.

Which lights are solid and which are flashing?

my IHD only works if it is directly behind my outdoor meters. if i try to move it any distance within the house it says connection lost. there is the outside wall between the meter and the display but no other walls.

I’ve moved your topic onto this thread as I think it may be relevant.

You’ll need to keep your In Home Display (IHD) as close to the elec meter as possible for it to be able to display the correct information.

The HAN light will only flash when a new device (such as an IHD), is being added to the home network. Once this process has completed, the HAN light, will turn itself off.

My Smart meter (Chameleon) has been working fine for the last year, but is now showing 'Connection lost' and only the bottom of the signal 'wedge' is lit, I've tried switching it on/off, it is not far from the meter anyway (almost directly above it), and even if I move it into the garage right next to the meter then it doesn't show any stronger signal. On the Meter itself (liberty 100) the WAN light does 5 flashes every few seconds (which I think means it has good signal to the cell network?) I don't know if it is pure coincidence, but it is exactly 1 year (to the day) since the smart meters were installed, it hasn't previously had a problem connecting. Is there any means to reset/reconnect it somehow? 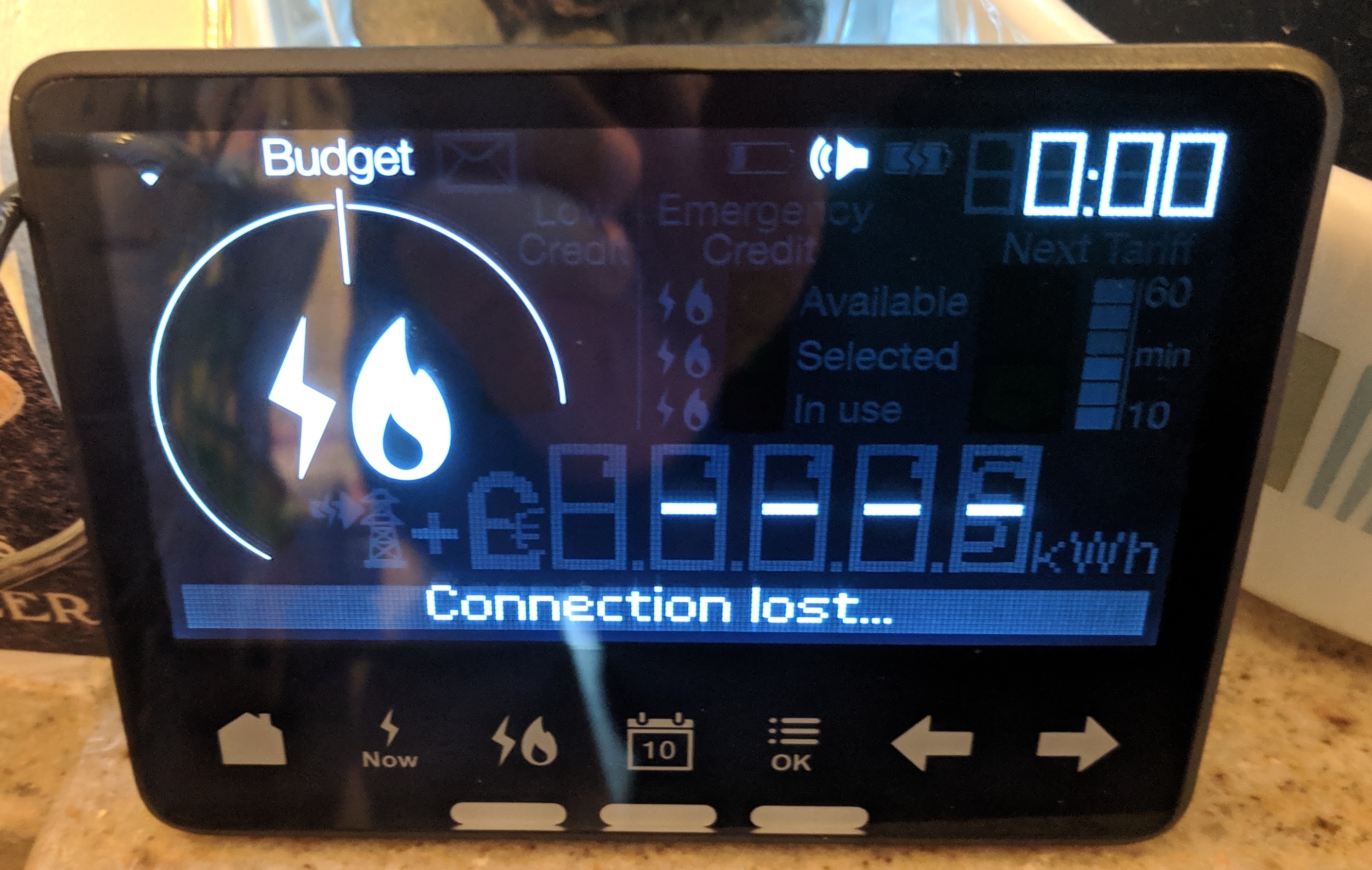 +4
Hi - I've moved your post to this thread where you should be able to find the info you need.
Your guiding light(bulb)
T

Userlevel 3
Since I have just posted on how I fixed my IHD, here is a link to my post:

Thanks for this which could have been really useful if my IHD had an on/off button! Smart meters for gas and electricity were installed last week. Elec works fine on the IHD but not gas. I have tried to ring OVO with no success. My Chameleon is ref. IHD3-CAD/CA30201. Any advice?

My Smart meter wan light is flashing but the IHD monitor has lost connection. Try switching it off and on but still not working. Help please
PL


Hiya - no off button: just unplug it and make sure there's no batteries inside

more info on what to do if one of your smart meters aren't showing up on the IHD here!
Carbon neutral - we need a community to get there!
S

You've told me the gas meter is not communicating with OVO and to leave it for 2 months (!) to see if it works. If it doesn't you're going to fit a relay. So I'm left with a fancy gas meter buried in the garden making it almost impossible to read (the old one could be read from above). Smart energy? I think not.

+4
Hi - the usual time frame for the meters to "settle down" after being fitted is 3 months. We wouldn't intervene before this time frame in case signal is still up and down and not settled.
Your guiding light(bulb)
S

The signal from the gas meter is nil, not up and down, and you told me it is three months, not two, before I have any idea how much gas I am using.

+4
Hi - I can confirm the time frame is 3 months. It's possible for the meter to get into communication with us within this period. If we've still got no comms after 3 months, we could safely assume it sin't going to happen and we can then look into a fix.