I have know a green and interesting energy. I would like to share it to you and do you think it is a green energy.

Researchers at the Royal Institute of Technology KTH Stockholm have successfully developed transparent wood for construction and for solar cells.

This must be the news of interest to architects and carpenters around the world. The new wood will fundamentally change the way we design buildings and structures today. Depending on how it is used, this wood can turn into a window that looks out to the sky or converts sunlight into energy.

In the near future, this type of wood will be used as a window.

To create this transparent wood, the researchers used a chemical process to remove natural wood, thereby whitening the wood to the extent that it can be seen through. Of course, this transformation process is quite complex. Eventually, the panels will be finished by squeezing a clear transparent polymer over.

In the near future, this kind of wood material will be used for windows, or even doors that look outward but outside can not look in. Researchers believe that new wood material can be used to make solar cells in a usable state.

"Transparent wood is a very good material for solar cells because of their low cost, stable and recyclable supply, which is especially important for covering large areas of solar cells." Said Professor Lars Berglund at KTH's Wallenberg Wood Science Center.

In the past, transparent wood was used in small-scale laboratories. However, the latest achievements of the researchers will help produce this type of material on an industrial scale. It is believed that transparent wood will be a sustainable pathway to help build better buildings.

Userlevel 7
Very interesting, - do you have a link to this article? Maybe I'm trying to subconsciously rule out it being a hoax 🤣

+4
Thanks for sharing this, . The original research paper you quote from was published over 5 years ago. There is another paper here, published in 2017 which shows later directions of research.

I'm not convinced that this "transparent wood" strategy is best evaluated by considering it as an alternative to glass, either for windows or PV solar panels. Glass is a very cheap material with an extraordinarily long lifetime. There is an Elizabethan house, 15 miles from where I am, which still has fully functional glazing.

The solar panels alluded to by the researchers at KTH are those using the current silicon technology, nominally 16% efficient. They suggest that the scattering of light within the outer wood layer might permit increased efficiency by allowing longer path-lengths for photons passing through the silicon. That might be the case, but the efficiency increases are likely to be marginal.

The maximum possible efficiency of a silicon-based PV panel is (only) 23%, and is constrained by the electron arrangement of the silicon atom itself.

Contrarywise, there are other (non-silicon) solar panel technologies which have exhibited conversion efficiencies in excess of 40% within lab tests.

So there seems little to gain by merely using transparent wood instead of glass as the outer protective layer. Alternative technologies are likely to overtake the researchers working with modified wood before they have perfected a cost-effective manufacturing strategy.


Of greater interest is the possibility of using Transparent Wood as a semi-opaque roof material. The scattering effect allows diffuse sunlight to illuminate the interior, much like that achieved with current-generation light-tunnels.

Moreover, the Researchers, Li, Yang and Fu, have been doping the de-lignified wood with quantum dots, which has the effect of absorbing light in the blue region and retransmitting it in the red region of the spectrum (photoluminescence). 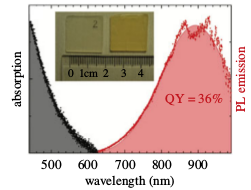 There are possibilities here for using LED sources, which are highly efficient at generating light at one particular wavelength, and then passing it through a Modified QD Wood panel. This would create a wide-spectrum illuminated material which could be incorporated into the very fabric of the building.

... and if I was 40 years younger, that's the sort of project which would have me beating a path to the doors of KTH ☺️
Save energy... recycle electrons!