+2
Today, 14th March 2018, we mourn the loss of a genius. Stephen Hawking suffered from a most debilitating disease, but yet defied time and lived to be 76 earth years old.

Many will remember him for his work on the physics of black holes and the consequences of time itself not being a constant. He brought enlightened to us in different ways. For me it was his definition of a miracle as an event which breaks the laws of physics {Ch.2 of The Grand Design; Stephen Hawking & Leonard Mlodinow}. As with all scientific truths, it is the simplicity of the explanation which underpins its veracity. 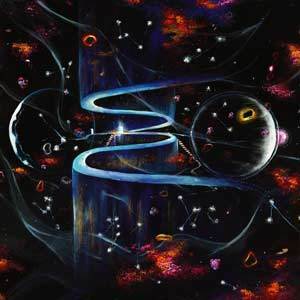 When faced with the announcement in 2011 that the OPERA experiment had detected neutrinos traveling faster than the speed of light, Hawking immediately grasped the gravity of the situation. He pronounced that if this were so, then Einstein's Theory of Relativity would definitely be dis-proven. In the event it transpired that the measurements themselves were in error; Einstein was right and Hawking survived to fight another day.

And yet, is this scientific theory truly correct? Well, not entirely...

We now know that whilst no sub-atomic particle can itself travel faster than light, the information it conveys can indeed do so.

When two particles are created simultaneously, they exhibit a feature called entanglement. If one particle of the pair describes a clockwise spin, then the other will be anti-clockwise. This feature holds true however far apart the particles are then separated: alter a characteristic of one particle and the opposing effect is instantaneously manifested in the other.

In June 2017 Chinese physicists used the Micius satellite in an experiment which demonstrated entanglement in pairs of photons separated by distances of 1200km. Since sub-atomic characteristics can be considered as having a binary state (a status of a 0 or a 1), this series of observations holds out the intriguing possibility of digital communication across limitless distances without the constraints imposed by the speed of light.

Depending on their relative positions in orbit, radio signals between Earth and Mars are delayed between 4 and 22 minutes. This currently renders direct control of remote robots impossible. But if that control were to be implemented using quantum computers in which the communications link used entangled particles, then no planet in our solar system is beyond being explored remotely in real time.

So there's the challenge.

Somewhere in this world are the brilliant young physicists who must stand on the shoulders of Einstein and Hawking and take this innovative research forward. They too, like those before them, must write their chapter in the Brief History of Time.

In honour of the impish humour of Prof Hawking, all puns intended!
Image is Quantum World by Akiane Kramarik; a fitting tribute to one who explored that world by an artist inspired through meeting the one who made it.
Akiane
Save energy... recycle electrons!

Userlevel 5
What a lovely tribute Transparent :)