Having a new Smart Meter installed is something which most customers only experience once. This topic shows what the process involves and highlights particular issues with the newer SMETS2 meters which OVO started installing widely in March 2019.

You must be present for a Smart Meter installation. The Engineer needs access to the house, even if both gas and electricity meters are in external enclosures. There is an initial survey of the state of gas appliances and your electric consumer unit. Photographs are taken and any gas boiler is turned off.

The electricity meter is usually changed first. The Installer is permitted to snip the seal on the main fuse and can reseal it without needing to call your Distributed Network Operator (DNO). 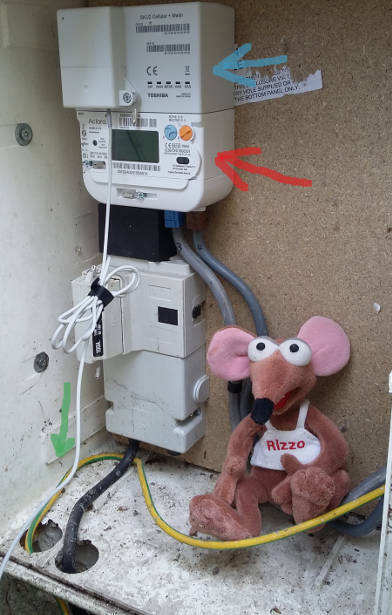 Here my SMETS2 meter is indicated with a red arrow. This one is made by a US Company called Aclara. It has two buttons marked A & B rather than the keypad of the earlier SMETS1 meters, which were manufactured by Secure.

Above the meter itself there is a communications module (blue arrow) which allows data transfer via the mobile phone network. There are several versions. As I'm in a rural area of Devon with relatively poor signals, this Toshiba unit is a Mesh Network device. It connects to an external aerial via the wire marked with a green arrow. 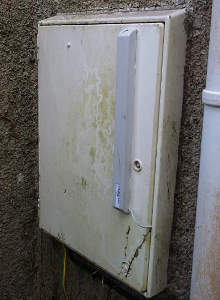 The aerial is the tall rectangular box which is literally stuck onto the outside of the door.

Your gas meter may be in a wall mounted enclosure, or buried in a "semi-concealed" box as is mine.

The Installer first removes the old meter including the round regulator (orange arrow), and then screws a steel mounting frame in place, shown here with a green arrow. 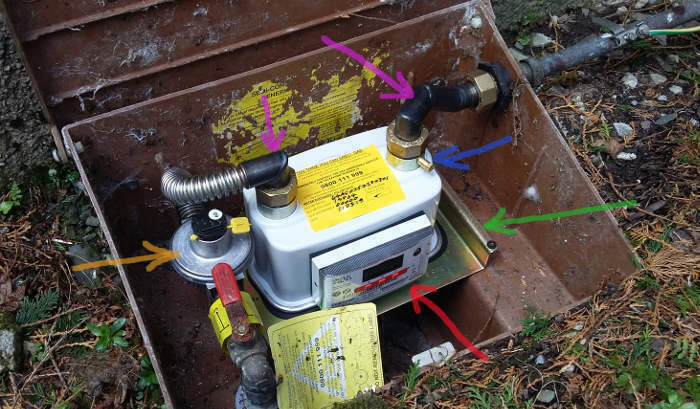 The meter may seem a relatively large device, but it's actually two items. The actual SMETS2 Smart Meter is indicated with the red arrow, and slots into the larger outer body.

My new gas meter is manufactured by Uniflo. Because there is no electricity available, it contains an inbuilt Lithium battery which should last around 10 years. A Gas Smart Meter spends most of its time in sleep-mode to conserve power, waking up every few seconds to send a signal to the SMETS2 electricity meter.

OVO have designed and fabricated right-angled steel pipes marked here with purple arrows. These minimise the height required and allow the enclosure lid to properly close.

During the commissioning process, the installer connects a manometer to the test point identified with the blue arrow. The gas pressure pushes the fluid up one side of the u-shaped tube. If it remains steady over a two-minute timed period, then there are no leaks.

The Installation Engineer will now take another set of photographs which get inserted into relevant places in the electronic "form" on his mobile phone. There is a minimum set of 23 pictures which must accompany any installation.

As the exact installation process may evolve over time, please note that these SMETS2 meters were installed on 11th March 2019.

Spiffing stuff, basically like Brexit, no real end date at all.

Userlevel 1
What's the problem in the north?

+3
Hi - Arqiva aren't making use of the existing mobile phone communications, so they have much more work to do than Telefonica.

In order to hit the target of the %age of properties which must have SMETS2 functionality, Arqiva are using dedicated radio telecommunications at 400MHz, which they call Flexnet.

It's the same system they're employing for Smart Water Metering in the Thames Water area, where leakage is a massive problem.

I don't know whether the delays with deploying SMETS2 coverage in the Northern Territory are due to technical problems with Flexnet or simply the fact that they have to physically install 700 new masts.

Their territory is not only larger than either the Southern or Central areas, but also has a significantly lower population density. Using 400MHz not only gives them communications over large distances, but also better wall penetration to reach meters in older stone buildings.
Save energy... recycle electrons!
S

In November 2016, the communications network provided by Arqiva as part of a 15-year contract with DCC, covering the North of England and Scotland, went live. Consequently, revenue streams from this contract increased in the period. Following ‘go-live’ further service roll-out will continue and accelerate."

If they went live two years ago their continued roll-out should be pretty well advanced by now!
In a financial report last year they claimed to have met their contractual obligations with 88% coverage, some way short of the easy 99% they were claiming after trials in 2013.
But none of the above explains why the northern roll-out has been stopped?

I assume the trials in 2013 were part of an appraisal in order to be granted the DCC Network Contract for the Northern Territory. We can actually read those contracts because they're posted online here and they date from 2013.

There are 3000 SMETS2 meters already live in the Northern Territory. So this suggests that a technical problem has arisen which curtails the programme to add more.

Perhaps the problem isn't actually within Arqiva's control or contractual remit. Let's remember that the Communications Modules which attach to the SMETS2 Electricity Meters are supplied by another company. And, of course, the data passes out of Arqiva's network and into equipment run by CGI IT UK Ltd. Either of these could be holding up the meter roll-out.
Save energy... recycle electrons!
S

Userlevel 1
I believe I messed up my dates, the tests were in 2010 but I was reading those reports and the 2013 contract reports at the same time also the 88% coverage was a 2017 report read in 2018.
I think on rereading my original post I was in as my wife would tell me "grumpy old man mode" and I was trying to shoot the messenger (sorry). You are the only source I can find to date saying the rollout in the north has been stopped, though a late March a Bulb blog is admitting to issues with installations in the north and a concentration at the moment more on the Central & South areas.

My grumpy thoughts were - here I am in the north 400m from two mobile masts with 3 bar indoor coverage on at least 3 if not 4 mobile networks and I'm stuck with a radio network which apparently doesn't work.

So a little more reading in a calmer state of mind.

Arqiva 2018 full year report states a coverage of 97.75% and helping Telefonica meet its minimum 95% indoor coverage in their areas.

I also agree that other parts of the system may well be responsible . The CGI IT Uk Ltd equipment is possible, but is the data they get from the Arqiva radio network dramatically different from the Telefonica network data once the transition method is removed?

The communication module is more likely, it is a single option from one company in the north while there are two companies and about five variants in the south. While Arqiva can claim 97.75% transmission coverage (downstream) they have no control over the strength of the upstream transmission from the communications modules which is likely to be much weaker, and as they say it takes two to tango. Or am I in grumpy mode and just looking for someone to blame?

The other thought is why is this such a secret? Other than yourself and the afore mentioned Bulb blog there is nothing in the media, that I can find, about this problem. You would have thought that with all the delays with SMETS2 and the £11Billion cost the media would have picked this up and be having a field day at the governments expense.
Page 6 / 6