OVO are seriously messing with my head & causing me so much stress.
I am continually locked out of the app. I've no email address registered due to OVO abusing it. Been told to log in using MyOVO ID instead to avoid busy times, to not stay logged in as the system can't handle it. But it still happens. Even with an email address registered I was locked out of it.
I tried to discuss this today after being told the reason I'm locked out is due to the email address by the social media team, contradicting numerous people I've spoken to.For several months OVO haven't said this is the reason. Neither has your technical team. So to revert back to this excuse wasn't helpful.
The guy I spoke to today & I reluctantly agreed to a complaint (as I have had them forced on me by the social media team)totally confused me with saying he'd add my email address,then remove it,send me a password reset link which might take 24 hours (when a password reset link expires in 30 mins) when my password is correct.
I didn't understand what he was doing. Got totally overwhelmed & hung up.
OVO don't seem to understand why someone wants to access the app inbetween statements.
I don't have the time, energy or ability to phone x amount of companies to find an alternate supplier, my health is poor, I'm disabled & found it stressful enough the last time.
I want a company I never need to talk to who have a reliable app ,are consistent, honest & transparent. Who don't blame me for something that is outwith my control.
This is what's showing. It's not saying email address/ID/password is wrong.

Sorry i can't work out how remove one of these attachments with MyOVO ID in it. 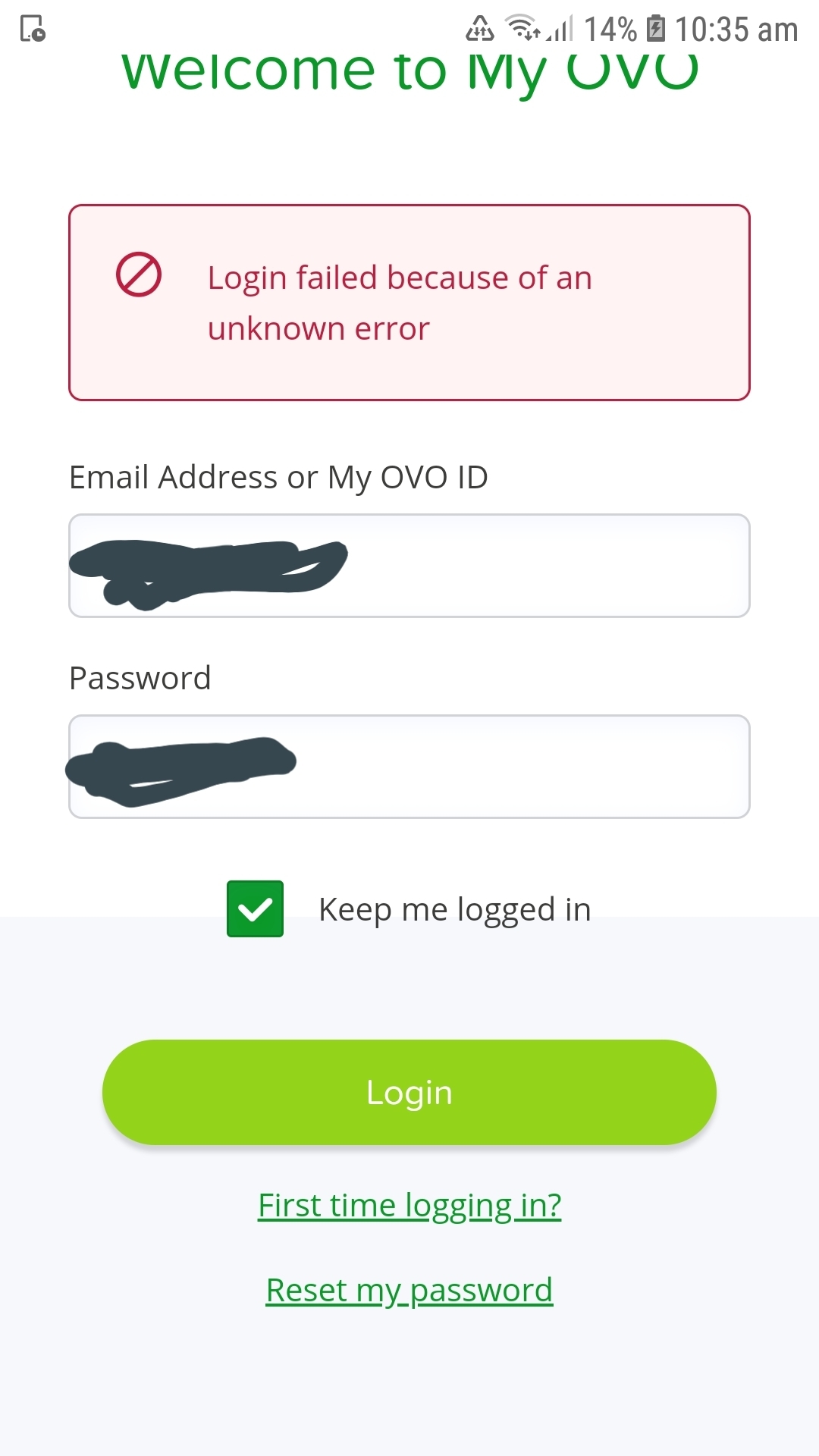 If this issue has been escalated to the Complaints team, they'll be looking into it now and will be in touch with you to reach a resolution.

If this issue has been escalated to the Complaints team, they'll be looking into it now and will be in touch with you to reach a resolution.

Thanks,
Nancy
Your guiding light(bulb)

Initially i agreed to making complaints.
But then they were being pushed on me repeatedly which very unpleasant.
More recently i have been refusing as i don't find it achieves anything other than stress.
I understand the Ofgem regulations about disatisfaction and official complaints.
I do like to be asked my thoughts on a complaint. Rather than someone else making the decision for me.
What you may think is the best thing to do may not be what i want.
Especially if it means waiting weeks for answers. Tech problems do take time.
This latest "technical issue"was supposedly resolved in January by your tech team.
No explanation as to what it was,how it was fixed,or how to prevent it recurring was given to me or your colleagues.
All sorts of reasons,excuses & at times i've felt lies have been given as to what's going on.
I say lies as the next person will say no that was never the problem.
I have more respect for someone who says i don't know what's going on rather than guessing. Or blaming me.
This has been going on since August so i hope you understand why i'm feeling so frustrated and fed up. And looking for answers on here.
As i really don't feel they are to be found within your complaints team. As so many things have been tried.
Once with very concerning results,other customers names & ovo id numbers appeared with password reset links!
I've even been asked to give your staff my password which really made me uneasy but i felt i had no other option so they could try it themselves. And they couldn't access it either. Which at least validated that there was a problem.

I've even been advised since last Summer to just phone the complaints team not customer services as they have more time,patience & understanding towards vulnerable customers.
Sometimes though you really let yourselves down.
I had said to one agent in frustration that i was going to leave but when i phoned again he said i thought you were switching companies?
I tried to explain that phoning a lot of companies asking numerous questions would be very difficult for me.
I got a reply well you're phoning here often what's the difference?
A huge difference actually, it's time consuming,physically,mentally & cognitively draining.
Where as i'm phoning one company about one issue.
That was an extremely disappointing response,i expected much better than this from Ovo. I put a lot of work into finding what i thought was a good company,

I don't feel this is the most complicated complaint an energy supplier will encounter on a day to day basis.
It's just i feel going on far too long and we're repeating things which i find very stressful. Once or twice is ok but four or five times isn't.
I did eventually agreed to a complaint after talking to a very understanding agent Jim, who seemed keen to find a permanent resolution for me.
He also has very good understsnding of my disability which has made it easier for as well.

I just wanted to see if anybody else has had similar problems and their does seem to be app issues mentioned here and on your social media platforms.

I am coming down hard on Ovo because of horrendous experiences with 2 of the big 6.
You are nowhere near as bad as them.
But there are things you could do better.
Customer service standards are my main issue,the lack of patience and understanding is very disappointing. Comments like "hurry up we'll be here all day if you carry on talking like this". I'm sorry i'm disabled i can only go at my speed not yours. It does take time for me to get my point across,i tend to over-explain due to cognitive issue to ensure i'm understood. As you can see by this reply!
I just want this app thing ironed out the best thing for you and me really is never having to talk to each other!
D Mack

Userlevel 6
This certainly sounds like a bit of a lengthy one, . I'm glad Jim was able to offer some support.

I'm sorry to hear the comment you quoted from a member of the team. We want to support our customer to the best of our ability, and I'd be very surprised if any of our members of staff have said, or come across as saying something like this. That's not the way we do things at OVO.

The OVO Forum is an online community where customers can support one another with their own knowledge and expertise. The issue you're describing seems to be very account-specific, which other Forum users wouldn't have access to. The best way to get this sorted might be by contacting the Customer Services team or the team on Facebook (via messenger).

Nancy i'm not going say or write about something if it didn't happen.
Unfortunately that was said to me & i'll happily give the name of the person. It was Zac in your complaints team.
Pass that back to his manager or i'll do it myself when Jim phones me again tomorrow. Let me know which is best.

I'm on the ovo forum as i don't always find the social media team very helpful.
Other than cause a lot of stress saying things like my WHD application wasn't submitted,when it was.
They've pushed complaints on me totally against my wishes causing huge stress to the point i had my phone number removed from my account. As phoning me randomly is not appropriate.

Even yesterday someone argued with me about who i was talking to in what department! I know which number i phoned & their name.
There was quite a bit of un-necessary attitude in the response.
What was i wanting to achieve by messaging them? I only messaged to check Jim was phoning me.
They also thought jumping in suggesting things was helpful. Without knowing what was going on,how long it was going on for,why certain things weren't feasible.
Ie interfering when the matter was being handled fine by Jim.
I will be feeding that back myself.
D Mack

I'm sure none of the team on Facebook intended to intervene, or come across as having an attitude. They're there to support customers and answer queries in the same way as the Customer Services team are on the phone - I'm sure they were just trying to be helpful.

If you're in regular contact with a member of the Complaints team regarding your account, it might be best to stick to these scheduled callbacks with the elected agent, to avoid any confusion with other departments.

My question was simply is Jim calling me.?

I agree with you but was them who thought it was helpful to read the notes & advise me.
D Mack