I had a bit of time on my hands today (don't ask!) and I was wondering how long it would take for my old gas pipe to rust and cause a leak ?

It is hard to see in my pictures as it is in the background.

I am not even sure if there is gas in the pipe anymore although I think there is as why else would the pipe be turned off and capped ?

Am I worrying over nothing as the gas pipe is embedded in concrete which would surely 'eat' into the carbon steel in the same way that it does to copper piping?

My water mains is made of copper and that runs under the foundation of my house and it doesn't have a protective sleeve to protect it but that's another story !

I’m probably not quite the most qualified person here to answer this one, but I would assume that the old pipe would have likely been drained by now. However, I would definitely recommend against trying to see if it still works, just to be safe. Assuming it has already been drained, there’s probably no risk even if it did rust over time.

What I’m more curious about though, is the rather strange arrangement of the current gas pipe, which almost looks like it would break if you were to trip and fall on it. I don’t really understand why anyone would have done it that way!

My gas meter is not under any danger of anyone tripping over it as it is in the corner of my room and is enclosed in an alcove although I have since decided to get rid of the wooden lid !

See photo of the concrete that has covered the tap. It was like that when I moved in.

Also you can see what I mean by my alcove. I decided to get rid of the lid as it wouldn't fit on properly after my gas smart meter was fitted as the grey contraption at the top gets in the way!

I think it's called a regulator ?

Edit: I forgot to send the photos !

Ahh ok, I see the other photo now. It didn’t load in the first time for me for some reason.

If it’s been like that for the last 25 years, I wouldn’t have thought it would be a problem now or you’d have likely noticed it already. But if you’re concerned, I guess it might be possible to try and find out whether that old pipe is still connected at all and go from there.

No doubt a certain expert will notice this thread though.

No doubt and I know who you mean

I am hoping you are right about your theory as to it probably isn't going to be a problem after 25 years as my copper water mains pipe is the same and runs under my kitchen and living room - a distance of around 24 foot in total and as previously mentioned runs under the foundation of my house so would probably be very expensive to fix the leak if it did occur.

I know I currently have no water leak as I have a water meter fitted and there is no meter reading change unless I am actually running water out of the tap(s) !

It was there when I moved in and I can’t have it taken out but as it turns out, it actually saves me money.

Ooh… a technical question. I just love these

Judging from the construction style of the wall behind that capped-off gas pipe, I’ll suggest it’s a fair bit older than 25-years.

It’s probably either from the era when we had local gasometers to pressurize our gas pipes, or from the earlier days when towns made their own coal gas. Given your geographical location, , I’m favouring the latter! 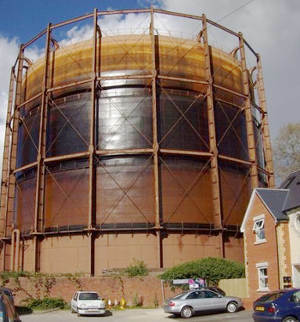 You need to consider what happened when that local distribution system was no longer needed. Each house had to be visited and have the old pipes isolated when the new supply was introduced. During the changeover period there would still be coal-gas in the old pipe, and if the tap was turned, it would poison everyone in the house.

Under the Gas Regulations at the time it was necessary not only to remove the old meter, but also to cap the pipe just above the isolator valve.

When the old coal-gas plant and/or gasometer was finally decommissioned, the larger pipes in the road were removed because the metal could be recycled. That left the small pipes on private properties remaining.

I agree with you I think that the old gas pipe is older than 25 years judging by the amount of rust on it.

If I wanted to (I don't) I could take the flakes of rust off with little more than a blunt screwdriver as they are that loose !

So are you saying that even now there might be coal gas in the pipework after all this time ?

Also I wonder how in the day coal gas would compare in price with modern natural gas that we use today ?

Also whether coal gas could produce more energy per m3 of gas volume!?

So what are the chances that the old pipes in each property were completely drained when the rest of the pipework was removed?

Unless we know for definite however, I think we’d have to assume that there’s at least some leftover traces in those remaining pipes for the time being.

As for comparisons between the two… I couldn’t possibly say. I’m too young to have been around for those days!

Does anyone know what the chances are of the concrete 'eating' into my copper water pipe that is laid directly into the concrete underneath the foundations of my house ?

Coal gas contains Carbon Monoxide and Hydrogen. So it was both poisonous and had a pretty low calorific value of around 12MJ/m³. The current Gas Regulations stipulate that “mains gas” must have a CV greater than 37MJ/m³.

I doubt that your old gas pipe was capped at the other end when the main was removed from the road, so any residual gas would’ve long since disappeared.

Copper pipes are rarely laid directly into concrete because the cement or additives might contain sulphur. So although the cement itself won’t corrode copper, the usual precaution is to use copper pipe with a pvc sleeve around it (coloured yellow). Even so, the amount of corrosion which could be created by such low quantities of sulphur compounds are unlikely to be sufficient to actually perforate the thickness of the pipe wall.

If your water pipe were to suffer corrosion, it would probably be from whatever is in the water, not the concrete!

I had some plumbing work done a few weeks ago and the plumber commented that with modern water regulations, the mains water pipe would be encased in a pvc sleeve if laid underneath concrete and he said he guessed that it would only be a matter of time before I had a water leak under the foundations of my house.

Regarding your comments about the calorific value of coal gas as opposed to natural gas is interesting as it appears that natural gas has around 3 times the CV of coal gas and I didn't expect the difference to have been that high !

Your plumber is making a common mistake. It’s not a chemical reaction between copper and cement which could cause corrosion. The issue is more to do with abrasion caused by thermal expansion. See here.

Thanks for putting my mind at rest !