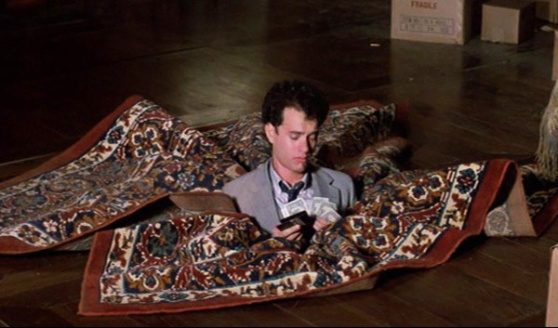 As it was Halloween this week, we want you to share some real life horror stories about any home improvements made, big or small!

Have you had a bad experience booking some work to be done on the house, or paying for a new appliance to be fitted?

How about the installation of a new bit of kit - nightmare engineers or a wasteland following the work?

What about after - were your expectations met in the longer term, and if not, why?!

It’s your home we’re talking about. Improvements and new appliances can cost a lot of money, so the stakes and the expectations are high. That’s why we want some help in understanding what you want the experience and the outcome to be, and what can go wrong...

Userlevel 1
Erecting a shelf for my wife’s nicknacks in our downstairs toilet.

Screw encountered some resistance so I doubled-down. Imagine my surprise when the wall spouted a high-pressure jet of water shooting horizontally across the hall.

I screamed for my wife to turn-off the flow at the mains while I attempted to cover the water jet.

She immediately squatted to pull out all of the cleaning materials stored under the kitchen sink so she could see and grapple with the tap.

Thankfully she succeeded at her first attempt much to my relief.

Our favourite handyman, Andy, replaced my temporary plumbing repair with a section of flexible pipe and replastered the wall. The shelf is in the garage (with my cable and pipe detector!).
Solarpayz
E

Userlevel 2
I had the house rewired. The Electricians were extremely messy, far messier than the builder who knocked through between Dining Room and Kitchen.

The final contractors let themselves down by their project management. A 2 week estimated timescale ran to 5 weeks.

Userlevel 4
Thankfully, no real nightmares with external contractors, as the only major work we've had done in the last few years was a new kitchen (which I've done myself previously), but decided to get the installation service this time and had no problems. I tend to do the majority of DIY jobs myself and have had the occasional problem or find aspects more awkward then I expected. My one tip to anyone would be not to do plumbing work on a Sunday - I was doing some pipework and needed a specific fitting, but it was after 4.00 pm so nowhere was open and I ended up cobbling together all sorts of joints and connectors - it ended up looking like a Christmas tree!! - just to get the job completed!!!
Steve

When I first moved into the house some 30 years ago, after a few months we noticed an awful smell in the kitchen and damp carpet (the thin stuff like flotex) As the builders were still on site, the site foreman came to have a look.

In the corner of the kitchen, the soil pipe had a leak at the bottom so sewage was leaking under the carpet!

Two of the team made a superb job of a repair without having to dig the pipe out of the floor and we got new carpet and a nice hamper to boot!

+2
Someone who has just bought his first house discussed with me issues that might need attending to before moving in. I had a look around and drew up a list. A high priority was the apparent absence of any access point to the foul-water sewer.

Somewhat daunted by this, he asked for my hands-on assistance. I checked next-door's access cover, and calculated where this would meet his external downpipe. For good measure I stuck my hand down the adjacent gulley to confirm where its outlet pipe would converge into the same inspection chamber.

Duly confident, I proceeded to dig up his well-laid level patio outside the back door. Finding no access cover at the original ground level below, I then probed the ground beneath with a steel bar to a depth of 50cm... and discovered absolutely nothing. 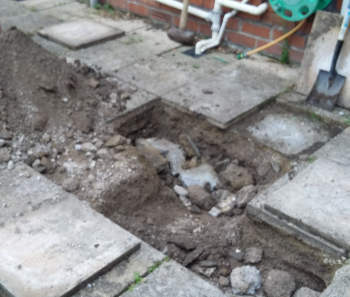 Four hours later I departed... leaving him with a hole in his hitherto functional patio.

Userlevel 4
Chennai's a bit far to go to get contractors in!!
Steve