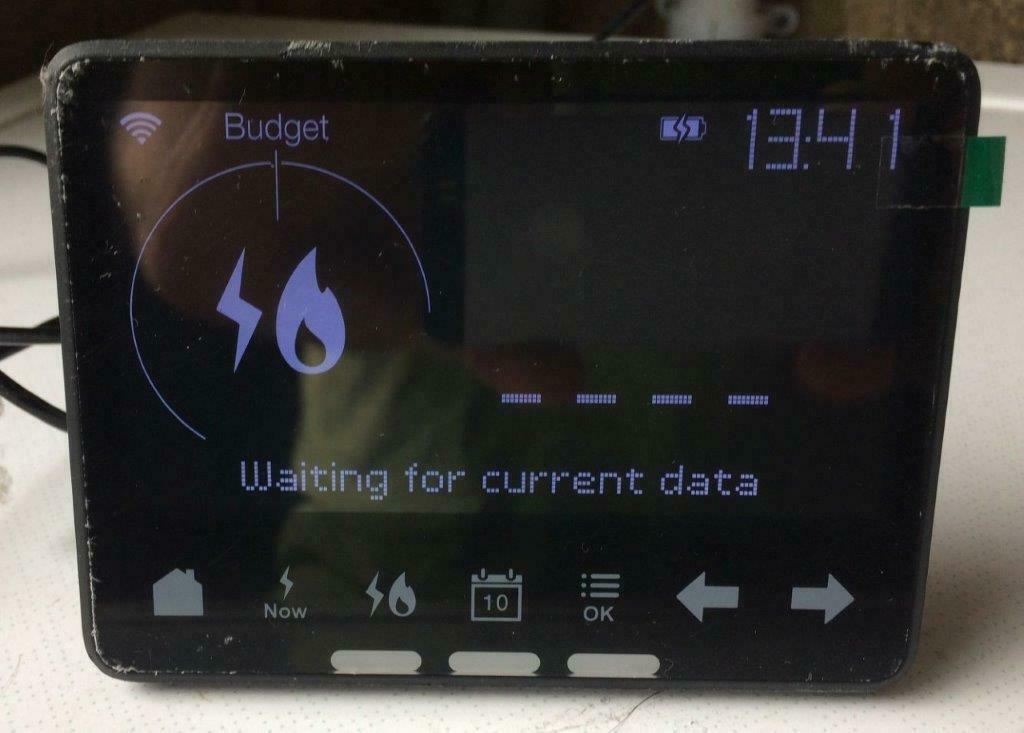 and I’ve tried everything and still won’t work. It was fine 2 days ago and only installed a week ago
icon

Updated on 11/09/20: If you have a SMETS2 smart meter and IHD, see this topic guide to diagnose connection issues.

If you have a SMETS1 smart meter and Chameleon IHD, see this IHD guide to diagnose connection issues.

If you have a SMETS1 meter with a Pipet IHD, see this IHD guide to diagnose connection issues.

Here’s some causes of connectivity issues with your In Home Display (IHD) and smart meter:

For HAN or Firmware issues, see this guide for a possible fix. If this doesn’t work, reach out to our Support team via Facebook, Twitter, or webchat via the Help Centre.

Every Minute it restart, and the meters stopped reporting data to myovo 2 days ago and it's set to report half hourly.

Spoke to Facebook page this morning they told me to raise and emergency case.

Hi again  if you have a look around other Forum Topics, you’ll see that there are lots of customers who reported similar issues to Customer Support, and believed that “the issue” had been fixed.

However, it reappears later - possibly the next time there is a firmware update sent to a Smart Meter or a software upgrade of the Online Billing System.

It seems that a significant proportion of “fixes” which are being implemented for an individual account, are transitory.

If you request an “emergency fix”, then you may well just be joining the ranks of all those other customers. That hasn’t actually resolved the underlying problem(s).

At the moment I don’t even know whether you have SMETS1 or SMETS2 meters, so it’s a little difficult to identify what might be the root cause of what you’re seeing.

SMET2 I think Aclara Zigbee is the electric meter, they were both installed early March.

OK, that’s starting to make sense to me now, .

It’s likely that there are two different issues happening.

Let’s start by confirming that I agree you have a SMETS2 meter manufactured by Aclara, and it has a Communications Hub bolted on top, which is most likely to be manufactured by Toshiba.

It doesn’t matter which type of Comms Hub you have. Whichever it is, it uses a secure wireless system called ZigBee to fetch readings from your gas meter, and send usage data to your IHD.

It can take several days (or even weeks) to fully commission a new Smart Meter. The final steps are to download your actual tariff data into the Comms Hub and get the Billing System to take over automatic handling of your meter readings.

You would normally know that this stage has been reached by looking at your daily Usage on your Online Account page.

So I’m beginning to wonder if the off-site commissioning process was actually completed.

What are you seeing when you look at your online Usage?

It sounds to me like a commissioning issue, , when you say emergency case do you mean that an re-visit is being arranged for you, so that an engineer can look at your meter?

Either way reaching out to the team, as you have done is the best way to get issued resolved.

It's an EDMI communications hub with 2 light HAN & WAN, the online portal data was fine till 2 days ago then just stops.

We've never had a problem with the meter since they were installed but now they are both not reporting.

The IHD only worked for electricity on day 1 then stopped displaying and gas continued to work until last week and it now restarts ever 30 seconds saying lost connection waiting for data.

I believe it was you I was chatting to on Facebook Messenger this morning.

I did think it may have been me, , glad to hear it’s getting sorted!

I think it may have something to do with commissioning.

I’m not sure how long it takes for someone to take a look.

but at the moment MyOvo looks a bit like this

We both think this is a commissioning issue.

And the reason you have an EDMI Comms Hub with two indicators is because you’re in the Northern Territory. The telecommunications with your meters are operated by Arqiva using the old 400MHz ITV frequency!

Hey everyone, although especially!

An update...I sent an email to Ovo and the morning that they phoned me to discuss it my IHD started working. My guess is that before the call they attempted some sort of health check of the meter and that got it working.

What has been more of an issue now is the actually data being sent to Ovo. I seem to sporadically be getting drop outs of data, for both Elec and Gas. This manifests as days in the app that simply state no data available, to days which are displaying 0 usage for every hour, yet still having a cost of the day in total. For days which actually do show Gas data, it seems incorrect (I know specially when my gas usage is and this isn’t displaying correctly on the app).

Whenever I email or speak to anyone they just say they are receiving data and all is ok! Even though it isn’t….not helpful!

So odd! It would be great to find a forum member here that has figured out the whats and the whys….. If we’re getting your meter readings correctly remotely, it must be something between the meter and the IHD….

My IHD is doing the exact same thing,
I’ve powered it off for a few Hrs, even moved it closer to the meters & it still won’t reconnect.
Anybody have any help or advise on how to re-sync it.

Its easy to fix! Npower sends you a bill regardless of your home display. I use it now to light under the stairs. Keep it on this screen (Its the only working one) to get the best light.

You’ll also be amazed how many times I’ve managed to crash some of the older generation displays. The old Smart Energy Tracker I had from SSE was so unreliable, I managed to crash it several times a day - it eventually corrupted itself to the point where it hardly works anymore.

Sometimes you can try the old classic fix though. If you’re able to, could you try turning off the IHD, taking the battery out for say, five minutes, pop the battery back in and power it back up while it’s as close to your Electricity meter as possible? If that fails to fix the trouble even when the IHD is right next to your meter, then something is definitely not right and the best advice I can offer is to have a chat with the Support team and they can try a few fixes. You can find the contact details on this page.

Don’t forget that the IHD itself is just one way to see what your meter is doing without having to check on the meter itself. As long as the WAN connection to the supplier is working fine, that’s the most crucial bit.

You might also find it useful to check out your usage on your online account or in the app, since they’ll show you the same details as the IHD will, based on how often you have your meter set to submit readings.

Just so you know, if you’ve only recently had your shiny new smart meter(s) installed, recently changed supplier or have only just had a flashy new IHD in the post, it may take a few weeks or so for everything to fully activate. If you still can’t get it to work properly after the first six weeks, that’s definitely a good time to reach out for more help.

If that’s an actual photo of  ‘ IHD, he’ll need one of these if he’s going to remove the battery…

Or perhaps a sledgehammer, since they’re super effective at switching off just about any portable electronic devices…

When it comes to devices that have non-removable internal batteries, there’s usually some other method of “disconnecting” the battery temporarily, such as pressing certain buttons or pushing a reset hole with a paperclip. I don’t yet have one of the new OVO IHDs as I need to wait for the S-2 team to get my meter up and running properly first. But I’ll hopefully start to play with it once I’m able to get one.

Well in this case   doesn’t need to worry about the battery.

The error message is almost certainly a loss of data being sent from the Communications Hub (above the electricity meter). The IHD itself looks to be OK and has successfully found the ZigBee channel for the Home Area Network, as shown by the healthy signal strength indicator at top-left.

As you’ll see elsewhere on the Forum, we’ve been chasing these “missing data” errors for the past 9 months. There are at least three different faults at work, and possibly more. There may also be interaction between them, which makes it all the more difficult for most customers to report accurate symptoms.

The next stage for  is to check the LED indicators on the Comms Hub. I’ve posted a flashy diagnostic here for customers in the Southern and Central territories. I’m unsure where you live,  so please complete your Forum Profile page because that’s where I look to see what communications network you’re on. Thanks

I’m not sure what  a IHD is? or if ZigBee is part of the BBC? maybe i take the IHD and but it in the B.i.N. Many thanks for making something that should be simple complex.

Sorry about that! I’ll try to explain quickly for you.

When we refer to IHD, it’s short for In-Home Display, which is basically the gadget you get with a smart meter that lets you keep track of what you’re using.

Meanwhile, ZigBee is a wireless protocol that works a bit like Wi-Fi or Bluetooth, but is mainly used by smart home gadgets like smart meters and the In-Home Displays to talk to each other. If you have anything like Philips Hue light bulbs, those also use ZigBee too.

I hope that helps. But please let me know if you’re still confused

Securing energy by zapping security bugs... For that is The Blastoise Way!
Page 6 / 6