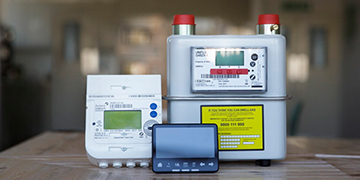 Hi, I had my smart meters installed yesterday lunchtime, this morning my IHD tells me I used a combined gas and electric totalling over £25!! there is no way this is correct. My daughter had a shower this evening for 5 minutes and the electric cost went up on the IHD by £5.....anyone else having these unusual readings? its worrying me as my bill is going to be massive!
icon

There seems to be a massive silly bug in IHD units being supplied with 2nd gen SMETS2 smart meter installs. Even with the right tariff and kwh readings it fails at doing the basic maths to calculate the the cost.

For now, our one is just turned off until there's some kind of official announcement about how they're going to fix this daft bug.

Update 18/11/2019: OVO are rolling out firmware updates region by region which is fixing the issue causing IHDs to show incorrect figure.

Ah… and one of the Moderators has moved our discussion onto the relevant thread!

since your SMETS2 meters are new, you might want to also have a look through this longer Topic about Smart Meter Installation. That’s were I and several others have posted stuff which we learned after ours were first installed.

Yes, I know the BA connection because I have a relative who works for them. It could be a very different global transport system which emerges from the aftermath of Covid-19 and Brexit.

Hi  thank you for that.

I have just spent a very informative hour reading all your previous posts regarding this. It was most helpful and calming as i was concerned that my ‘new’ system was faulty. It’s only been in 4 days so i’ll give it more time.

You know the connection with Speedbird and BA as well.

Hi   With an ID like that I assume you work for BA?

If you’ve only just had SMETS2 meters fitted, then your IHD won’t yet be able to pick up your correct tariff information. That arrives right at the end of the off-site commissioning process.

I’ve read loads and loads of other posts about this issue, I’ve just been upped to SMETS 2 gas and electricity and the readings are a mile out on the IHD.

Previously had SMETS 1 with electricity only and that was accurate.

I can’t seem to find any resolution in these posts, the most recent being about a month ago that i can see.

Has anything happened recently to fix this or os there an answer to this somewhere else.

I want to transfer to another supplier but guess if the readings on the IHD are incorrect they won't touch me.

Any light on this guys?

Ahhh OK, in that case the above might not apply. These threads here and here may offer more advice.

I should add that we’ve had a smart meter and the home display unit for over a year now. It’s not new.

I’ve moved your post here, , check out the best answer, this issue should right itself in the near future.

Hello. This morning our Home Display gizmo showed a consumption of £2.36 combined energies. Normally this would be around 60p.

We always turn the heating off at night, usually around 8pm., and this morning we hadn’t turned it on again before we saw that reading.

The electricity consumption was low but the gas was apparently over £2 ‘s worth.

Looks like our Smart Meter or Display unit has had a nervous breakdown.

Userlevel 6
I've moved your post here, , there is plenty of handy information in the above thread. has hit the nail on the head, the meter and IHD needs a bit of time to fully sync up.

Tom, it can take two weeks or more before your meter is properly connected and providing the correct readings, there’s a complex process to go through which you can have a link to if you wish.

+2
Hi - the actual message you need to jump to in this (long) Topic is my one here. Then read the rest if you still want to!
Save energy... recycle electrons!


I've moved your post here, , see the above best answer and the large thread for more info!

Smart meter installed yesterday, was told about all the virtues of tracking real time usage and costs being displayed based on my actual tariff.

Looking at the IHD its reporting that in the middle of summer (so no heating) on a day where the only gas usage was the boiler heating the hot water cylinder for less than an hour - which has cost nearly £9.

Just seems totally inaccurate. It’s worrying because I now don’t know what to expect on my bills.

My typical usage for total usage in summer (may to sept) for both fuels is c.£2 per day
T

Seem to have a follower

I will be plain, I fit Smart meters and come across all that that entails, I'm not claiming to be a professor of Smart meter workings, I give what I know, have experienced, and others have passed on in my field, and I work with some top engineers.
I've read back what I wrote and it seems quite easy to follow I think,....any advice or help I try to give on here is in good faith. In this instance it relates to some of the problems ovo customers have been encountering with ihds.... Maybe.... Its something I added to the conversation because a manual reset is required on the ihds we install, and funnily enough are the same as ovos

Which previous post are you referring to when you say that it's worth noting as well?
As well as what...?

I can't find anything on this Topic where anyone was discussing an IHD failing to pick up data that was being (correctly) transmitted across the HAN.

If the meters are communicating with the Comms Hub, then that's the source of data which gets sent to the IHD.

I've received several code updates sent to my SMETS2 Comms Hub in the last 5 weeks. These have changed the values which are displayed on the Chameleon IHD. However, the process occurs without intervention. There's no reset required.

How could an IHD be picking up an earlier set of data such that it required resetting in order to now get it correct?
Save energy... recycle electrons!
T

What's also worth noting as well, is the ihd may not reset itself. Once commissioned on the secure (smets 1) meter set up, it would auto turn off and immediately back on to reset, on the smets 2 set up, the ihd needs manually turning off and on.... So even though the meters might have been commissioned in that period of time after an engineer has been, you probably will have to do a manual reset (on/off) for you to get proper recorded energy consumption on your in house display
T

The meters in the North and central North do indeed carry the Same communication hub, and yes its a two light system on the hub, han and wan, if it's red it will be solid and you have a problem

but the green lights you see flash at varying rates dependant on state of connection etc so that can tell you all you need to know, as long as you know what they mean

Ahhh you're the brains,

.
As far as commissioning its possible, maybe not as far how OvO fit Smart but it definitely can be done

Sorry, no . I don't work in the energy industry. and I have met when visiting OVO at the beginning of June. And he will probably recall that I work as a builder/designer.
Save energy... recycle electrons!

+2
I'm afraid that's not possible . The Installation work on site does as much of the commissioning as can be achieved at that time. The four devices (or three if gas isn't used) are paired with each other, and checks are made to ensure that there is a viable link between the Communications Hub and OVO's SMETS2 team.

This link is not direct, but first via the WAN provider (Arqiva or Telefonica) and thence through DCC. At that stage the signals are using a bare minimum of encryption.

Once OVO have verified that the link is operational, DCC take over the next stage of the Commissioning Process. They, and not OVO, own the Comms Hub.

Only in the final stages of the process will DCC send the necessary ID numbers to OVO which allow them to start running and configuring the SMETS2 meter components themselves. This includes downloading the customer's tariff info and changing the data stream to match the input required by their in-house billing system.

This procedure has taken years to establish and agree contracts across all parties. It is enshrined in the regulatory framework and has been verified by GCHQ to ensure that it is secure. It should never be possible for someone to arrive on-site and fully commission a meter onto the National Smart Meter Network.
Save energy... recycle electrons!
T

Sounds like a meter fitter to me, spy in the camp

Just a few small steps and ovo could really improve customer experience when having smart meters installed, it appears to me they are rushing the process.
T

All these problems boil down to the fact Ovo engineers do not commission the meters on site.
The meters are installed but the commissioning is done at a later date remotely, so there will be delays in the meters working properly, and until commissioned they are not showing correct usage, tariffs, etc
Really to stop all this confusion and aggravation Ovo should be looking at commissioning on site.

Thanks for the update

Firstly, you don't have a "mesh problem"!

88% of Comms Hubs in the Southern & Central Territories don't have any need for a Mesh network. Your Comms Hub is operating just fine with the modified 3G network operated by Telefonica. That's why the WAN indicator is flashing.

Secondly, you should definitely message the team on webchat via the Help Centre to report the loss of SMETS2 electricity readings. Try to give as clear a set of symptoms as possible so that  can also alert Ben for further investigation.

When was the SMETS2 installation date?

Have you made any changes to your energy requirements on or around 13th July, such as installing PV panels, or a heat pump on Economy-7?