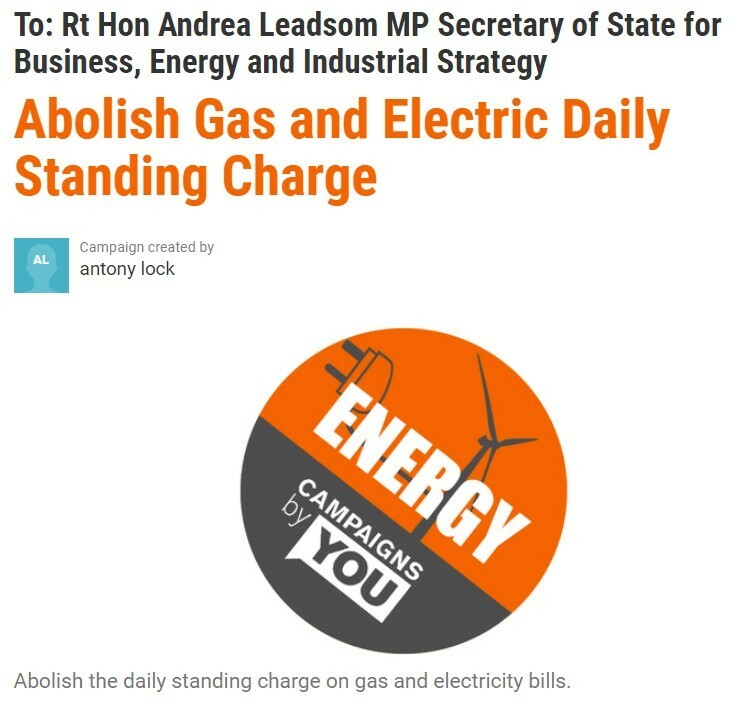 Together we can make a difference! Please sign the petition using the link below.

Abolish the daily standing charge on gas and electricity bills

"The only queer people are those who don't love anybody."--Rita Mae Brown
T

Why not just get the government to stop adding 5% tax which is a absolute disgrace
A
I agree with , the standing charges should be abolished and there should just be a unit rate for gas and electricity that covers all the costs of supply.

Standing charges make it more difficult than it needs to be to compare prices, reduces competition and its an anachronism that belongs back in the days when the energy industry was nationalised and you had no choice about your supplier.

You've just contradicted yourself saying on one hand we would save money on standing charge being abolished, and said rightly, that the abolishment of standing charge would be replaced by increased unit prices for gas and electric
If you don't like Ovos standing charges go elsewhere.


I think you need to re-read comments.

No mention whatsoever of an increased unit price for gas and electric!
"The only queer people are those who don't love anybody."--Rita Mae Brown
T

I agree with @Slinky , the standing charges should be abolished and there should just be a unit rate for gas and electricity that covers all the costs of supply.

The last sentence, says it all.

I'm all for getting fair, transparent, pricing tariffs, and know exactly where you stand etc.
But it appears some people expect things like electricity, gas, water to be free or priced at an absolute minimum, but don't realise the efforts it takes to get these utilities to your home etc.

Standing charge is easy to work out
T

Unit price that covers all costs.... Am I missing something


I don't know why you're so confused, was purfectly clear with his comments.

There was no mention of an increased unit price for gas and electric in comments. You read it wrong.

We all know there are costs involved in supplying each service and the standing charge is an old addition put in place many years ago to cover the costs of supply and repairs to the network keeping you connected.

It might also surprise you that In 2016, Ofgem removed the requirement for tariffs to have a standing charge following recommendations by the Competition and Markets Authority. However, although suppliers are no longer required to set a standing charge on their tariffs most still do. The question is WHY? If Ofgem removed that requirment why are energy providers still adding it to our bills?
"The only queer people are those who don't love anybody."--Rita Mae Brown
T

I can see why companies have not took the step of abolishing the standing charge, its a big step.......
It would mean an increased unit price for gas and electric......
And that would put the company who took that step look out of psync with everyone else, customers may be put off and just see what's hitting them in the face.

I'm not disagreeing with getting shut of it, but it would mean an unit price increase, so you are paying more for your leccy and gas at usage.

And just for the last time, Phil said 'a unit price for electric and gas that covers all costs'
Covers ALL costs.
You take standing charge away, you think the unit rate will stay the same?
No.
You think there are no repairs no maintenance, no one waiting on call for emergencies when someone loses power or when there gas meter fails.....
No.

Userlevel 4
A Big step indeed but it's already happened in some cases and hopefully more will follow suit.

Granted, repairs to the network have to be paid for somehow but as we all know the wholesale cost of energy has fallen in recent years and yet greedy energy companies still continue to raise prices and with the massive profits these companies make I'm sure they can fund repairs themselves.

Thanking you anyway for your input, it's always useful to see both sides of an argument

"The only queer people are those who don't love anybody."--Rita Mae Brown
T

Hey I'm not arguing, and I've seen it from both sides, yea everyone wants to pay less and less, but there comes a time when it's not possible to cut anymore without losing quality of service, or like in last couple of years lose your energy supplier altogether and have the stress of being shifted to another, out of your control.
Sorry its lazy to just say energy companies can afford it, they make millions, not as simple as that. Ofgem rule everything, and if they say jump energy companies do exactly that or face massive fines, just like the cap on energy pricing when out of contract. Not that I don't agree with it.