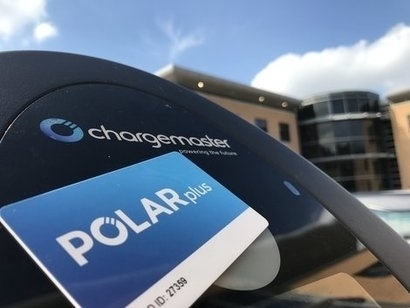 I love our electric car. I do want to know how much it costs to charge.

What I would like is a meter on the plug at the point it goes into the wall. This so I can measure only what goes to the car.

The cost to charge your car depends on the cost of electricity (KWh) and the size of the battery.
My car has a 7KWh battery. and I am on OVOs 100% renewable economy 7 tariff
I also use Bristol /Bath Park and Ride charging as well as Sainsbury's.

To charge from completely flat to 100% full costs approx.

My car does about 2.5 miles per Kwh

Using the petrol engine costs IN TOWN costs about 18 pence per mile (assume 30MPG)
and on a long run about 13 ppm. Assume petrol only 40 mpg

If I only drive locally it may never switch the engine on! The range on long journey using petrol as well is up to 400 miles.

I forget when i last filled up with petrol and I save perhaps £70 month in petrol and do not directly contribute to to any air pollution in the city centres.
View original

The cost to charge your car depends on the cost of electricity (KWh) and the size of the battery.
My car has a 7KWh battery. and I am on OVOs 100% renewable economy 7 tariff
I also use Bristol /Bath Park and Ride charging as well as Sainsbury's.

To charge from completely flat to 100% full costs approx.

My car does about 2.5 miles per Kwh

Using the petrol engine costs IN TOWN costs about 18 pence per mile (assume 30MPG)
and on a long run about 13 ppm. Assume petrol only 40 mpg

If I only drive locally it may never switch the engine on! The range on long journey using petrol as well is up to 400 miles.

I forget when i last filled up with petrol and I save perhaps £70 month in petrol and do not directly contribute to to any air pollution in the city centres.
S

It is generally quite easy to add a meter to the charger installed in your home. Ask your electrician. We have one and it cost about £20 plus about 30 mins to fit.

Userlevel 1
We've done some analysis on this and on average, with a mixture of home and public charging, the 'fuel' cost for an EV works out at around 4-5 pence per mile - much cheaper than petrol or diesel! That cost also factors in the cost of a POLAR plus subscription, which you get free for two years with the OVO EV Everywhere tariff!

This answer should always be short: a hell of a lot cheaper than petrol or diesel!

The long answer depends on how you charge and how many miles.

I have seen the various answers above but ultimately its so much cheaper.

I personally only use public charge points and have 3 supplies i regularly use:

I use a variety of charge options. Fast and Rapid regulary.

At this point i would say i am very fortunate the Genie and Podpoint are free to use in retail carparks. The Polar is the only one i pay for (polar plus) which costs £96 a year (roughly). I do about 6000 miles a year.

Roughly speaking that equates to pennies.

My point is what i used to pay for fuel now equates to my finance on a green running vehicle.

Make me feel good inside - what about you?

+4
Useful information there, ! And great to hear you're making good use of charging stations.

+3
I think there's another factor which can affect the true running cost of an EV.

The battery-stacks have a "lifetime" and will need replacing. As they are such a high proportion of the purchase price, I feel they should be included in any fair comparison.

I realise that this is tricky because some vehicles have a manufacturer's scheme whereby you effectively "lease" the battery-tray by paying an annual premium. Thus you don't have a one-off hefty bill if you get a battery failure.

Other manufacturers offer an insurance package along similar lines, but you still actually own the batteries.

What happens if you need to make a claim also varies. In some cases you get a complete new set of batteries. In others you get a set of refurbished batteries which have been rechecked by the manufacturer and certified to an advertised B-standard.

Moreover, I believe there is a measure of hardware redundancy in some vehicles. Thus if you have a fault on just one battery stack in an array of 48, it's possible for the stack to be isolated by the vehicle's software, allowing you to continue full use of the car, but with a marginally reduced maximum journey-time.

We all know that these batteries are being "swapped out" under these schemes because that's the source of the Li-ion batteries in OVO's XStorage product. These batteries still have years of life, but for some reason couldn't be put back in an EV as part of a maintenance regime.

So, has anyone done some rough maths on this?

Or do all the Forum members commenting here have EV's that are still so new they haven't yet factored in a battery exchange as part of the running costs?
Save energy... recycle electrons!
D

That sounds about right - I have a Tesla Model S 75 and costs around £10 to fully charge at home on day rate electric, which gives me around 180 ish miles. And that doesn’t factor in supercharging which I’m lucky enough to get for free.

Userlevel 1
From everything we and most major manufacturers, such as Nissan, have observed, battery replacement is a red herring and is simply not going to be required, because the batteries in electric cars will outlast the car itself.

Asset owners, such as banks and leasing firms needed some level of reassurance in entering the new EV market several years ago, as they were familiar with traditional car components, but not batteries and motors.

There are plenty of examples of private hire companies and other users that have racked up hundreds of thousands of miles (way beyond the average scrappage mileage of most cars in the UK) in early electric cars, even with a substantial amount of rapid charging, without any noticeable battery degradation.

We have a 100,000-mile Tesla Model S in our company fleet that still provides as much range on a full charge as it did when it was new!
Tom @ Chargemaster

+3
Hmm, ,
Well, there's a steady stream of second-hand Li-ion batteries from Nissan cars being reconfigured into XStorage "Home Batteries" by Eaton. So they're coming from somewhere!
Are you suggesting that these are from crashed vehicles rather than those displaying battery faults per se?

I understand a fair bit about the battery chemistry as well as the micro-controllers used for charge-control. I would expect a manufacturer to build in some charge-storage redundancy on a new vehicle. Thus, as the battery-stacks age, the charge-controllers compensate for this, which makes the owner perceive that the capacity isn't deteriorating over time.

A similar technique is used in (white-light) LED bulbs. Almost all LED diodes are certified L70, which means that they will still yield 70% of the rated light output (in lumens) after 5 years of operation. More reputable manufacturers ensure that their LED bulbs actually output a good 10% above the rated lumens when new so that the anticipated lifetime degradation doesn't result in them failing their certification later on.
Save energy... recycle electrons!
T

Hello All
In Reply to So how much does it cost to charge the car?

I am with OVO Energy and using OVO Everywhere.
When you login to OVO home page click on Live usage box, another page will open showing your usage history, also Your Energy Breakdown.
energy used for all your household including your EV
Which will tell you how much it cost to charge your EV last month.
tterb
tterb

I don't know how reliable Your Energy Breakdown is for recognising EV charging, but it's definitely not accurate for other categories. My gas central heating broke down several times in December and January, so I used electric fan heaters quite a bit in those months, but my Your Energy Breakdown shows £0 for electric heating in both December January. And I find it hard to believe that my 30 year old washing machine is so efficient that it only uses around 8p of electricity per wash!
SianiAnni

Using the free 2 years membership to Polar by joining OVO EV Everywhere, it costs me nothing to charge up every day at my local supermarket. I drop the car off, have a 10min walk home. have some tea, watch the news, and then walk back and pick it up all ready for the next day. 60 miles for zero cost, what's not to like?
Ohm's where the heart is!

If you charge at home, at night - and you have a smart meter, you can see exactly what it costs, how long it takes and how many kW - therefore amps are involved. Select day when looking at consumption and you will get a picture like this: 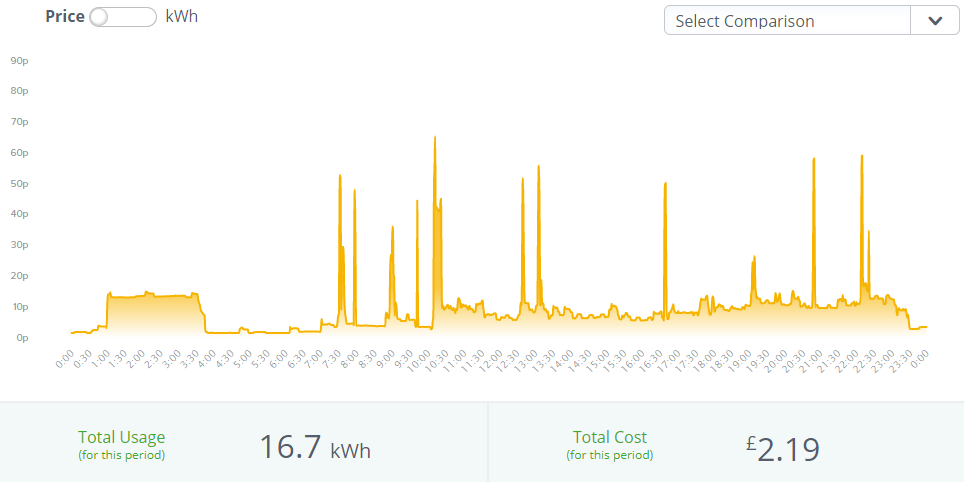 In this you will see a night charge taking about three hours and costing about 13 - 14 pence per hour, in this example. (From 1am to nearly 4am)