+2
When I moved into my current home I replaced all my lightbulbs with either LED or CFL. I've been here three years now and haven't had to change a single light bulb yet! Famous last words!

My memory of incandescents is that I was constantly changing some bulb or other in the house, especially those pesky GU10 halogens!

What are other people's experiences with using more energy efficient light bulbs?

I know when LED first came in people were polarised as many didn't like the quality of light they gave up, being too clinical or hospitally for a home, but now that are much wider colour temperature options.

+2
Good question ! I hate the GU10 halogen bulbs as I'm constantly replacing them!!

However, I agree that until more recently, the LED versions have not given off the nicest light as in colour etc so have stuck with the old GU10's!!

Bet has a view on this, as does lol!!

Any good alternatives to lightbulbs coming? Any new innovations we should know about?

Darran
Did a reply solve your question? Then mark it as the correct answer!

+2
I use the Hive LED bulbs with no issues. But with the Hive ones, As well as the Phillips Hue, you can set to how warm you would like the light. Comes in handy for some people.
Renewable energy + EV enthusiast

Let me offer a few pointers:

1. The UK Building Regulations are implemented through a series of Approved Documents. Part-L deals with energy efficiency (conservation of fuel and power). This is now simplified by separating out the technical requirements to a separate Domestic Building Services Compliance Guide hereafter called DBSCG.

The DBSCG states that 75% of interior lighting must be "low energy" (which is defined as a minimum of 45 lumens/watt) and deliver at least 400 lumens output. This could readily be achieved by any fluorescent or LED unit, but not incandescent/halogen bulbs.

The 2013 edition still allows these fittings to have a replaceable bulb. This is a relaxation from the earlier edition which stipulated that these lights must not be capable of someone retro-fitting a bulb of lower energy-efficiency. In practice this was universally ignored by developers.


2. LED emitters last longer if they run cold. The higher the junction-temperature, the sooner the diode will fail.

LED's are driven from a constant-current source. This requires "driver electronics" operating below 50v. If the light is to be run from 240v AC mains, then it requires further electronics to get the low-voltage required. Each electronic stage has its inefficiencies which means that heat is generated.

If you put this electronics into a sealed bulb immediately behind the LED emitter, it is obvious that the bulb's lifetime is compromised by the raised temperature. That's why installing 240v GU10 LED bulbs isn't a great idea!

Equally if your ceiling downlights ran from 12v DC, then it might be best to replace the halogen bulbs with LED types because the 240v-12v electronic transformer is positioned elsewhere. It's heat won't be diminishing the bulb-life.


3. I'm unsure what means by the "nicest light" output. Nice is surely the least descriptive adjective in the English language! :P

There are two different technical measurements which we normally employ to describe the "colour" of white LED light:

a. Correlated Colour Temperature (CCT), measured in degrees kelvin. 3000k is a warm white light, with plenty of red in it. 6000k is the harsher white light we commonly use in commercial offices like those OVO has in Bristol.

b. Colour Rendering Index (CRI) is stated as a numerical score out of a possible 100. This indicates the ability of the light to properly render the true colour of an object. LEDs are available with a CRI of 90 or 95, but at a price premium. This might matter more if I was illuminating a kitchen where I want to see the food under an even spectrum of white light.

I am designing my own LED lights for my home, selecting the emitters by choosing the CCT and CRI suitable for each location.

My study/workshop areas have LED units where I can change the CTT between 2800k to 6000k in addition to dimming the output.


4. I have no doubt that the better quality and efficiency of domestic LED lights are achieved by having dedicated LED units rather than using bulbs. The dedicated fittings typically offer efficiencies of 100 lumens/watt, and the LED emitters are fixed to an adequate aluminium heatsink to run cold.

I am experimenting with installing light-emitting objects within the fabric of the building rather than using the usual central ceiling location. Last week I started renovating a new room in an extension where the plaster-beading in the corners is a light source.

Later I will utilise acrylic shelves within a wall cupboard where the shelf itself is the source of light.

As more interesting light-emitting materials become available, I doubt that anyone will want to stick to single-point light sources such as bulbs.
Save energy... recycle electrons!


Haha, for me LED have always been a bit closer to fluorescent lighting, i.e too stark or "white" and for the home didn't create the "nicest" light. I don't like feeling I'm at work when I'm at home!

But as Matt mentioned, they are improving!!

I knew you'd have some good views and opinons on this


I need to get some of these bulbs and try them, I have Alexa so keen to make use of some of the other features!! That is on my list to do this week. I don't have Hive, so will look at the Philips Hue!! Any other recommendations gratefully received!!

Darran
Did a reply solve your question? Then mark it as the correct answer!

+3
Philips make a number of different qualities of LED bulb. About a year ago I was paying about £16 for an 18w Philips Master which gave 1500 lumens output. This has 360° illumination in all three planes, and is therefore ideal as a replacement in a standard pendant fitting.

Why pay so much?... because they were destined for use in the home of an elderly person who had been precariously balancing on chairs to change cheaper LED bulbs which were failing. There was a need for a properly-engineered bulb which would never need replacing again within the owner's lifetime.

The elderly have dim-vision and require greater illumination to start with. Moreover they don't like the "dark ceilings" which occur when downlights are installed.


I too don't like the "point source" of illumination which is typical of LEDs. Technology is available to spread the light across a wide surface, although the electrical industry is slow to take up these products. 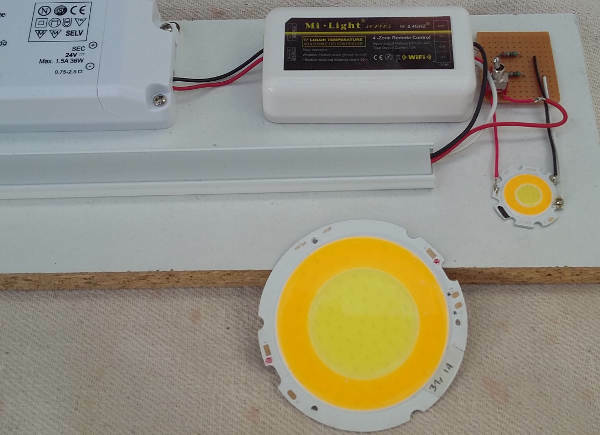 This is an experimental rig I'm using to trial large-format COB LED emitters. You can see the two areas which phosphorescently emit the warm-white (2800k) and cool-white (6000k). These can be mixed to produce the desired hue by switching them on/off rapidly using pulse-width modulation.

The larger disc is rated 40watt at 100 lumens/watt - plenty enough to floodlight the exterior of a building!
Save energy... recycle electrons!